Golfing in Hawaii is a favorite pastime of many, including podiatric surgeon, Dr. Josh Gerbert. He was always amazed at the great variety of colors found on a golf course and how relaxing it was to be in that environment.

Upon retiring to Hawaii from San Francisco in 2012 with his wife Barbara, Josh found himself golfing more and more and wanted to document the experience. Art has always been a part of his life—from pen and ink drawings as a teenager in Texas, to medical illustrations over his 50 year academic and medical career—but he wanted something bolder. Acrylics on canvas became the answer as he works to capture the views from his favorite golf holes for you to enjoy.
Site TitleSite Slogan

With a degree from Texas A & M, Josh found himself in San Francisco at the California College of Podiatric Medicine. His artistic side didn’t go unnoticed. As a freshman, he was asked to create 5 ft x 5 ft anatomical drawings for the classroom, which turned out to be a summer long project. The finished works lived on for years.

During his surgical residency he also acquired a master’s degree in Medical Education. After his surgical residency, he was hired as a faculty member in the surgery department at the podiatry college and began what’s been referred to as his “legendary” academic career. He was board certified in foot and ankle surgery and was a fellow of the American College of Foot and Ankle Surgeons. Josh spent 43 years of active full-time teaching, of both undergraduate and graduate medical students in the classroom, clinics, and operating room. He delivered hundreds of lectures at seminars and symposiums both nationally and internationally and authored over 50 scholarly works, including text books, chapters, journal articles, and other monographs, with the Textbook of Bunion Surgery serving as a standard for reference in the profession. In addition, he became a clinician and surgeon and soon found patients being referred to him from around the world.

Josh nurtured his creative side along the way with pen and ink medical illustrations that were included in his textbooks and journal articles, detailing and teaching so others could learn from his experience and expertise. In 2015 he was inducted into the Podiatry Hall of Fame by his peers and it was stated “We doubt there are any podiatric surgeons alive who have not in some way, directly or indirectly, furthered their knowledge of the science and art of foot surgery from Dr. Gerbert.”

Upon trading in his scalpel and retiring to Hawaii, Josh felt the call to let his inner artist loose. That, and perfecting his golf game, of course.

Surrounded by the beauty of the island and the thoughtfully designed holes, Josh picked up a paint brush in an effort to capture the essence of the experience. Studying his surroundings, admiring the light and perspective, he enjoys setting out to memorialize some of his favorite golf course holes on the Big Island of Hawaii in paint.

I would like to thank (mahalo nui loa) the following individuals for their encouragement and guidance in making this project a reality. Their expertise as writers and/or artist was invaluable.

Tiffany DeEtte Shafto at Tiffany’s Art Agency for helping write my biography for this website and suggesting the idea of creating greeting cards to promote my art.

Deb Thompson for encouraging me to pursue my passion and believing that my paintings of golf holes are unique and worthy of being displayed.

Trish Kimball for encouraging me to pursue my golf paintings and to become a member of the Waimea Art Council in order to display my art work.

Mike Bryan for listening to my thoughts on the various golf holes that I believed were unique and creating picture-perfect descriptions that depicted those thoughts.

Ron Haake at Glyph Art Studio for creating this excellent website and providing much needed advice on marketing of my golf art.

Lastly, but most importantly, my wife, Barbara. When we decided to retire and move to the Big Island of Hawaii from the San Francisco Bay Area in 2012, she encouraged me to take an art class in Marin County, CA in an attempt to rekindle my love of drawing and painting. She then purchased a large old-style wooden easel and had it brought to our new home in Hawaii as a surprise. I have used it continually for my painting. When I no longer had any wall space to hang these paintings, she said that it was time to consider sharing them with other people who may enjoy having them in their home or office. She has been my inspiration in taking these paintings of golf holes on the Big Island from a hobby to sharing it with others. 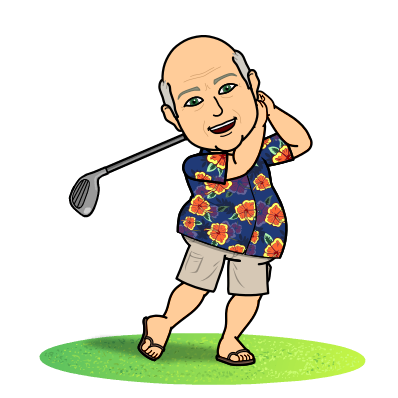 What's on your mind? I'd love to hear from you, and promise to get back to you as soon as possible.